Hei Cha or Dark teas have a long and important role in the cultural history of China.
Liu An, Liu Bao, Fu Zhuan, Tian Jian, Bai Liang Cha, and Ya'an are a few dark teas with the most famous being Yunnan's Puerh tea.
Liu Bao is often aged in baskets over time, while others such as Fu Zhuan and Bai Liang Cha
are compressed into traditional shapes and are often comprised from chopped large leaves and stems.
The flavor profiles ranges from fungal, earthy and honey sweet, to notes of petrichor, dates, hay, stone fruit, chocolate and betelnut.
These wonderful teas were often used as currency for trade at borders or along the Tea Horse Road.
Hei Cha is brewed with boiling water and can often accommodate multiple steepings. 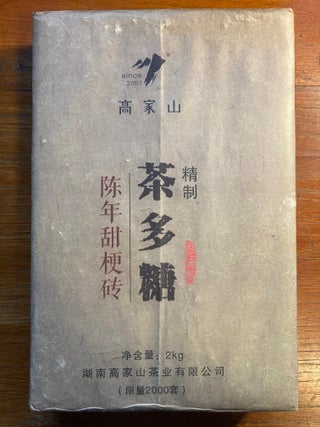 I like to bring in unusual teas for Panther Moon customers and this one fits the bill! This enormous 4 kilo brick is made up of wild Spring material from Gao Jia Mountain in Anhua, Hunnan, China. Made in the tradition of many hei cha, using chopped up tea leaves and stems - it looks a hot mess and as a retired Italian chef, I used to use a phrase, "Brutto ma Buono!" - Ugly but Good. Do not be deterred by the rough appearance, it is actually a top notch hei cha - the magic is in the masterful processing. The tea soup is exceptionally clean and pure, amber in color, thick and silky smooth, yet crisp. Notes of nuts, caramel and prune are enjoyed in the first couple steepings with a penetrating fruity, honey sweetness emerging in the third. As with many wild teas, produces a stimulating sensation in the mouth and a pleasant hui gan or throat feeling . The tea energy is very relaxing, almost has a reassuring, comforting vibe about it. Lower in caffeine and has very little astringency, if at all. Good for a long tea session with many steepings gongfu style using boiling water, or if you prefer, simmer it the traditional way. Made by Gao Jia Shan Tea Factory. 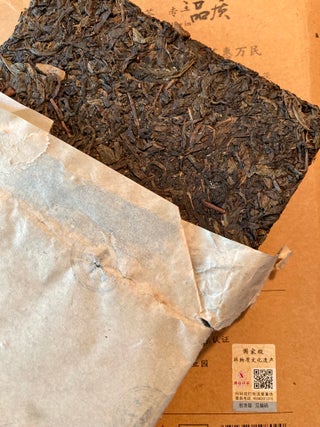 Straight up amazing Fu Cha! Highly aromatic on the rinse, with sweet floral, apricot, tobacco and marine (nori) notes. Brews up a thick, full bodied, amber soup with notes of flowers, nuts and dried stone fruits that are underlined by a deep, rich sweetness that is immensly satisfying. With its steady, realaxing cha qi, I could drink this all day long. 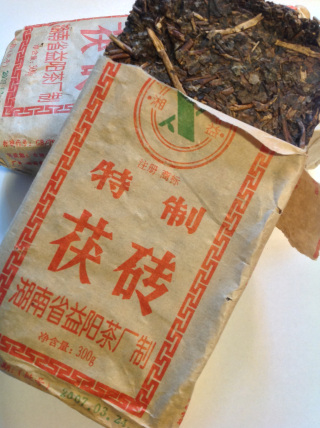 This 2007 Hunan Fu Zhuan is specially made for for the Tibetan "Po Cha", or Tibetan Butter tea. Leaves and small stems are coarsely chopped and pressed into traditional brick shape for transport. in Tibet and Mongolia, small amounts of tea are simmered for a time then poured into a churn called a dong mo along with hunks of Yak butter and a little salt and vigorously mixed until aerated and emulsified into a thick, delicious, nutrient-dense broth. Sometimes toasted barley flour or tsampa is stirred in by hand to make a light porridge. Nowadays, unless you have a Yak in the back, we would use grass-fed butter and a blender (and I like to add a bit of 1/2 and 1/2). Some folks like sugar instead of salt. Either way, it is a delicious tea and good for the brain and energy levels. in fact Po Cha is the inspiration for the Bulletproof craze. Also delicious brewed up gongfu - style with boiling water. has a nice medicinal sweetness with straw and fungal notes. Tibetan Po Cha:1 1/2 T Yiyang Fu Zhuan, 3 cups water, 1 T grass-fed butter, 1/4 c milk or 1/2 and 1/2, 1/4 t good sea salt (or 1 t sugar). Simmer tea in water for 30-45 minutes until reduced down to 2 cups. Strain into blender. Add milk, butter and salt or sugar. Blend (be careful, hot!). Pour into thermos and sip throughout day. 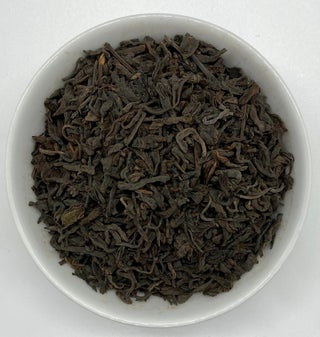 Liu Bao is a Hei Cha, or "dark tea", from Guangxi, China. Being a post-fermented tea it is similar to its cousin, Yunnan's shou puerh - but from a different tea varietal and Province. Nowadays, Liu Bao is fermented then aged in bamboo baskets for up to 3 years before being "released" to drink (this tea was fermented in 2015). Much like puerh tea, the older the better. However, this tea is delicious now. In the olden days, Liu Bao was shipped in great quantity to Malaysia as a ration for Chinese immigrant tin miners. Appreciated for its healthful, detoxifying and thirst quenching properties, Liu Bao tea was an essential ration provided along side their wages. When the tin industry dried up, the workers returned to China, leaving warehouses full of cheap Liu Bao to ripen for years in the hot and humid atmosphere, producing (by accident) what is now regarded as a connoisseur's tea. Some teas from the 1960's can for for more than a hundred dollars an ounce!

This Liu Bao is from one of the most famous producers, Wu Zhou Tea factory AKA Three Cranes TF, and is their 2503 recipe - a blend of teas of various fementation levels to produce a rich, satisfying cup with classic notes of betel nut, chocolate and mushrooms. Enjoy brewed Gong Fu style or in a pot with boiling water much like puerh tea.. 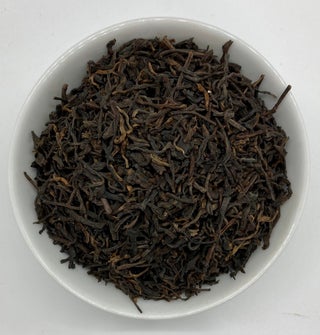 This is a lovely traditional Liu Bao which we call the "Fruit Danish" because of the cherry/berry top notes in both the aroma and taste and loads of cream sensation. The tea soup is clear amber-brown, very slippery and lubricating in texture as a good Liu Bao should be. The rinse brings out the raspberry, dried cherry and sweet aromas. There are some nice chocolate, sweet cream and hazelnut notes on the first steeping, with added fruit and slight medicinal notes coming in on the second. Enjoyable for many steeps and leaves a pleasant mouth sensation after drinking . Overall, very pure and sweet with hardly any woody astringency to be found. Unlike any other liu bao I have tasted. Easy going and relaxing! 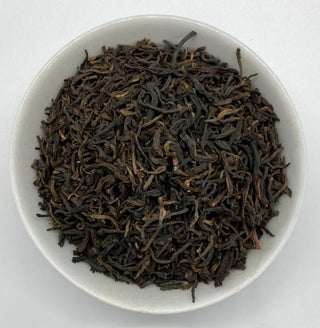 This Guangxi Liu Bao is lightly fermented, retaining some of its green character which has been been aging rather wonderfully since I brought it in. If you appreciate aged sheng puerh and Liu Bao teas, you will probably love this. Green wood, light earthy sweetness, a touch of fruitiness and floral notes are highlighted with a thick, silky smooth and soupy- soupy body. Very refreshing yet comforting, I could drink this all day long. 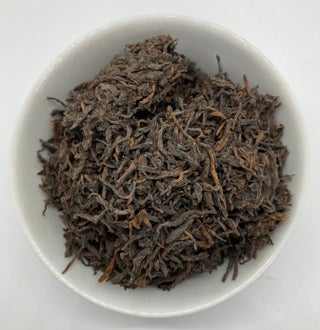 I wanted to bring in a clean example of a "wet" stored Liu Bao hei cha that provided contrast with other Liu Bao teas we carry . This is a traditional,, post-fermented Liu Bao that was stored for 5 years in its hot and humid birthplace of Guangxi, China, lending it a "chen xiang" or "old aroma" usually found in older Liu Bao teas. The dry leaf presents with an aroma of beets! and clean earth which is the first clue of its earlier storage. IIt brews up a smooth, dark and earthy soup - similar to a shou puerh - but with the characteristic betel nut/areca flavor, as well as chocolate, fresh cream, clean earth and mineral notes. The soup is medium bodied with a texture that almost floats before melting in the mouth. The tea drinker will enjoy a relaxing feeling from this tea after many repeated steepings. It 's a giver. 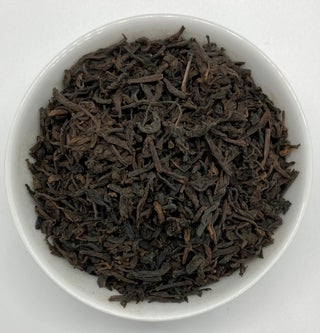 A delicious Liu Bao with a nice characteristic betelnut flavor and aroma! We picked up on notes of chocolate, camphor, star anise and sandalwood as well. A real treat! If no one buys it, we will drink it all no problem. Unfortunately I bought this many years ago and lost the recipe number, but is very good.

if I were prescribing a tea for the ails of the world, this would be one of them. Still considered to be somewhat young for a Liu Bao, one could really begin to appreciate how this tea transforms into something precious over time. Sadly, 30 + year old Liu Bao teas are getting prohibitive in price, but honesty this will do nicely. It is delicious and has a lovely settling effect on the body, mind and spirit that I deeply appreciate.

So let's get into the tea: Dry leaf is grade 3 with large leaves and some stems and has an earthy aroma. Rinsed leaf is earthy with camphor and light vanilla aromas. First infusion is loaded with classic betel nut, clean earth and camphor notes. If you don't know what a betel nut smells or tastes like you will after drinking this tea (think wet, green nut). The soup is smooth in texture and 'wet' , leaving a very slight numbing sensation due to the 'wild' nature of the leaf. Second infusion starts out with betel nut, light camphor and earth notes, then takes a deep dive into bittersweet chocolate, then finishes with a licorice root sweetness on the hui gan, or 'refreshing returning taste'. This tea can be infused many more time with corresponding delight. Makes one's stomach feel good and could be a nice digestive tea that reminds of an Italian Amaro. Very drinkable - we will drink it all if you don't first! 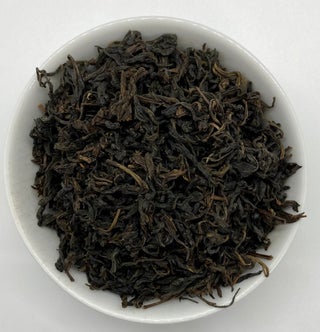 This hei cha or "Dark Tea" from Gao Jia Mountain in Hunan, China is made from hand plucked leaves and buds that are slow roasted over low temperature to create a full bodied and complex tea soup with a taste profile that falls some where in between an aged Sheng puerh and a Wuyi oolong. 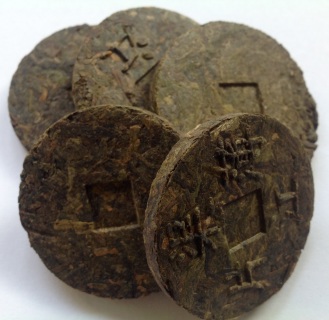 This rare find from Hunan Province, China is a tea of old, re-invented by a researcher who combed through ancient books and visited village folk to save this tea from extinction. Premium materials from the Fengjia and Tianmen mountains are fermented and pressed into coin shapes that brew up a aromatic, flavorful tea. 5 pcs (about 1 ounce). Xinhua County, Hunan Province, China 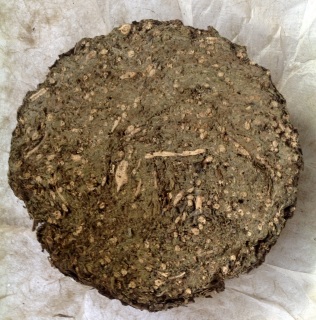 Bai Liang Cha is a traditional Cylindrical compressed fermented tea of Hunnan, also known as the King of Hei Cha. It's yellow broth is full, sweet and nutty, with light herbal and floral notes. This tea can be brewed for many infusions in a gaiwan or simmered for a time without developing bitterness. We try to bring in unusual teas for our customers and this will not disappoint! Anhui, Hunnan Province, China

Brew with boiling water or simmer the traditional way. 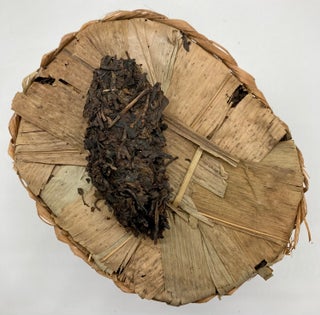 Liu An is a traditional he cha from Anhui Province in China made from a small leaf tea varietal that is fermented and then lightly baked over a wood fire. The tea is stored in a bamboo basket and it is traditional to add a piece of the bamboo along with Liu An for your steeping. Aroma is strong petrichor, and the soup is amber, super clean and syrupy sweet. This tea is always delightful; i love pouring it for seasoned puerh drinkers and watching their reaction of surprise.