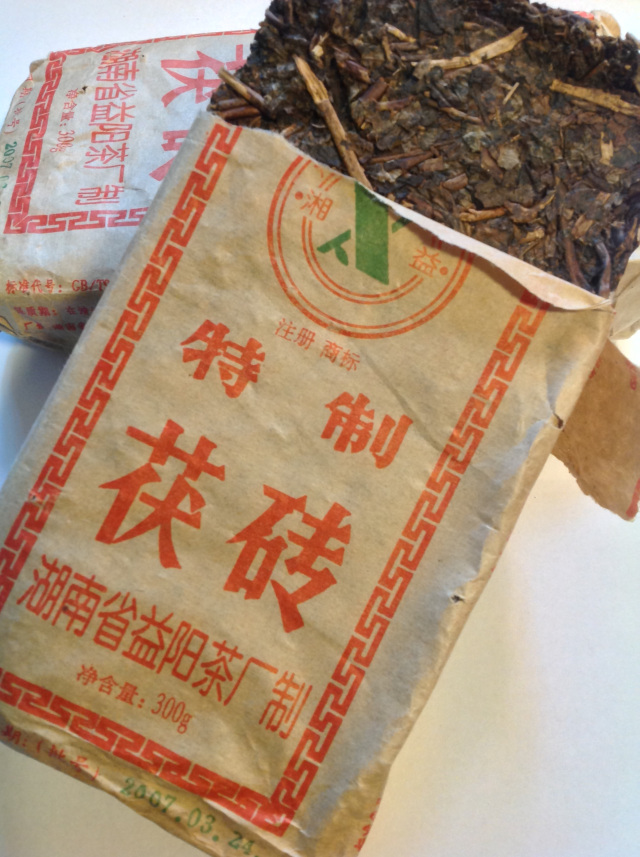 This 2007 Hunan Fu Zhuan is specially made for for the Tibetan "Po Cha", or Tibetan Butter tea. Leaves and small stems are coarsely chopped and pressed into traditional brick shape for transport. in Tibet and Mongolia, small amounts of tea are simmered for a time then poured into a churn called a dong mo along with hunks of Yak butter and a little salt and vigorously mixed until aerated and emulsified into a thick, delicious, nutrient-dense broth. Sometimes toasted barley flour or tsampa is stirred in by hand to make a light porridge.

Nowadays, unless you have a Yak in the back, we would use grass-fed butter and a blender (and I like to add a bit of 1/2 and 1/2). Some folks like sugar instead of salt. Either way, it is a delicious tea and good for the brain and energy levels. in fact Po Cha is the inspiration for the Bulletproof craze. Also delicious brewed up gongfu - style with boiling water. has a nice medicinal sweetness with straw and fungal notes.

1/4 t good sea salt (or 1 t sugar) Simmer tea in water for 30-45 minutes until reduced down to 2 cups. Strain into blender. Add milk, butter and salt or sugar. Blend (be careful, hot!). Pour into thermos and sip throughout day.